We recently began a series of articles to evaluate the history of corn and soybean yields and deviations from trend yield in Brazil and Argentina. The objective of the yield analysis is to provide a basis for forming expectations about the likely yields of the 2017 crops. The first six articles focused on the alternative sources of historical yield estimates, the selection of the appropriate series to use in the analysis for both corn and soybeans, the selection of the best-fitting trend model for each commodity and country, trend yield deviations in each country for corn, and trend yield deviations in Brazil for soybeans (farmdoc daily, November 2, 2016; November 9, 2016; November 16, 2016; December 14, 2016; December 15, 2016; and January 12, 2016). Today’s article examines soybean yield trend estimates and trend deviations for the Argentinian soybean crop. Since Argentina is the world’s third largest producer of soybeans and is the largest exporter of soybean meal and oil, yield and production prospects have important price implications. 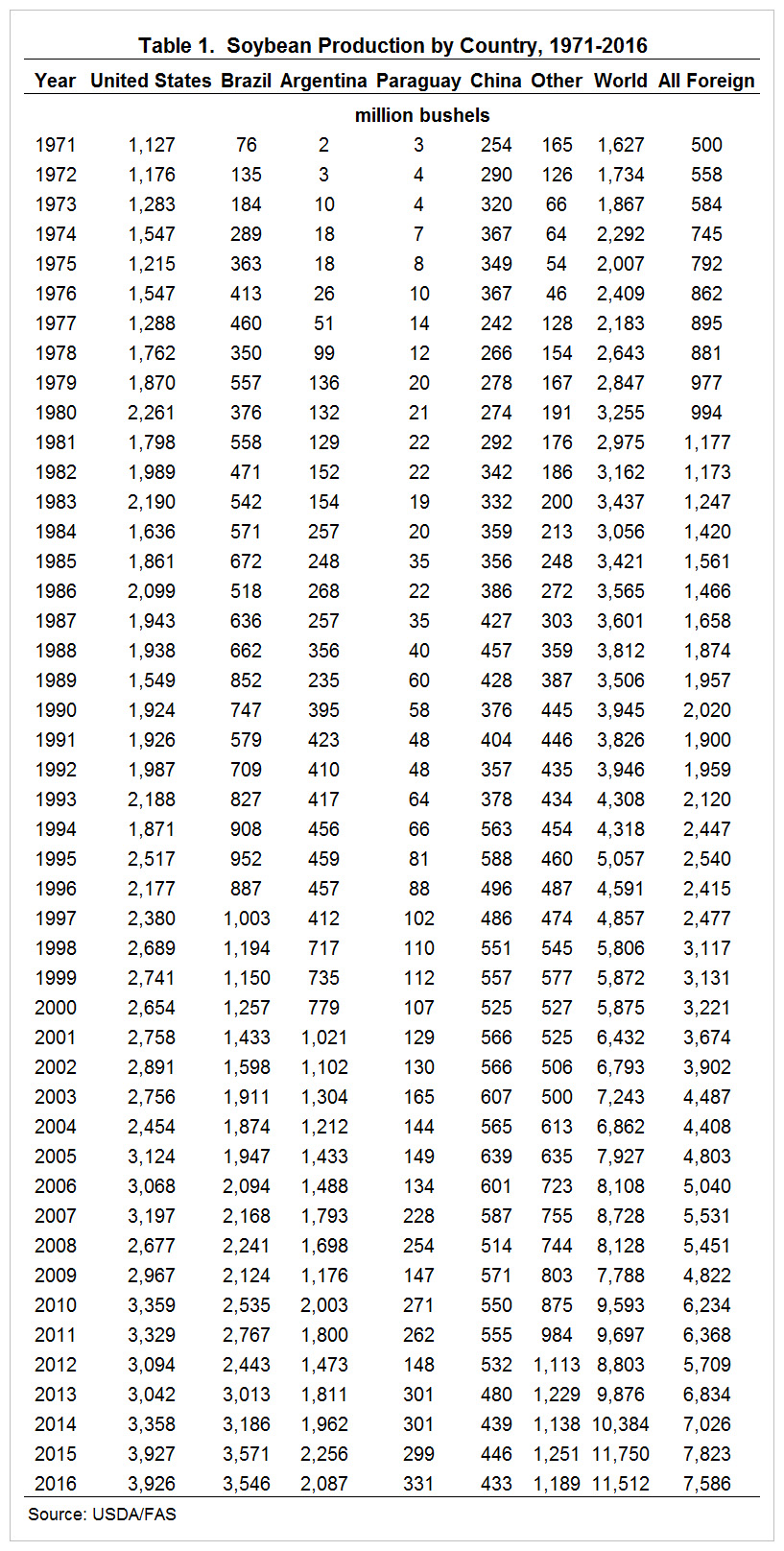 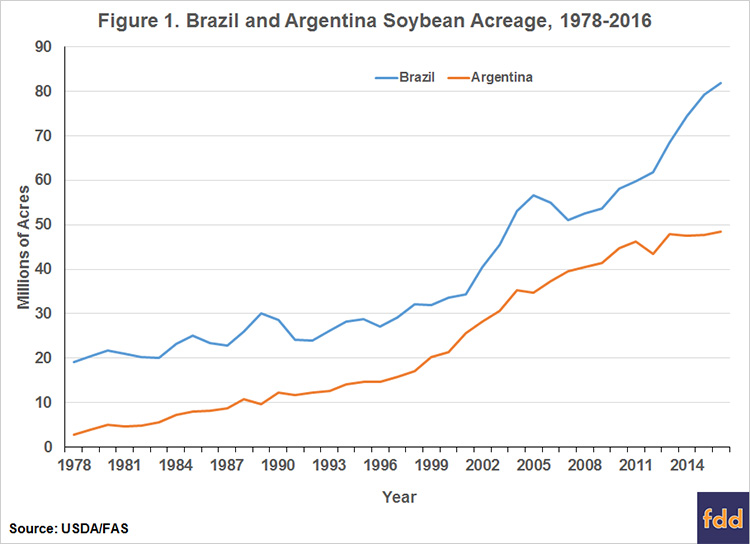 Figure 2 presents the annual soybean yields in Argentina for the period 1978 through 2016. As previously discussed in the farmdoc daily article of November 16, 2016, we chose a linear trend to fit the soybean yield data for Argentina. Note that these yield estimates are provided by the USDA’s Foreign Agricultural Service (FAS) and are based on past trends, expert opinion, industry intelligence, and AgMin, the Argentinian Ministry of Agriculture, estimates. Yields have obviously trended higher over time. The linear trend indicates annual average yield increases 0.37 bushels for Argentina. A linear trend explains about 49 percent of the annual variation in actual yields in Argentina. The historical soybean yields in Argentina show large variation around the trend with an extended period of above trend yields from 1998-2003. The linear trend since 1978 explains a much smaller percentage of yield variation than is the case for the U.S. (81 percent) and Brazil (79 percent). 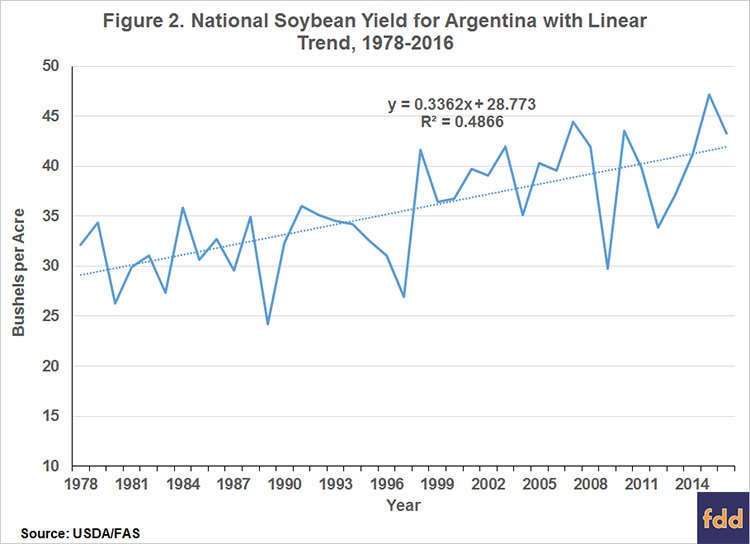 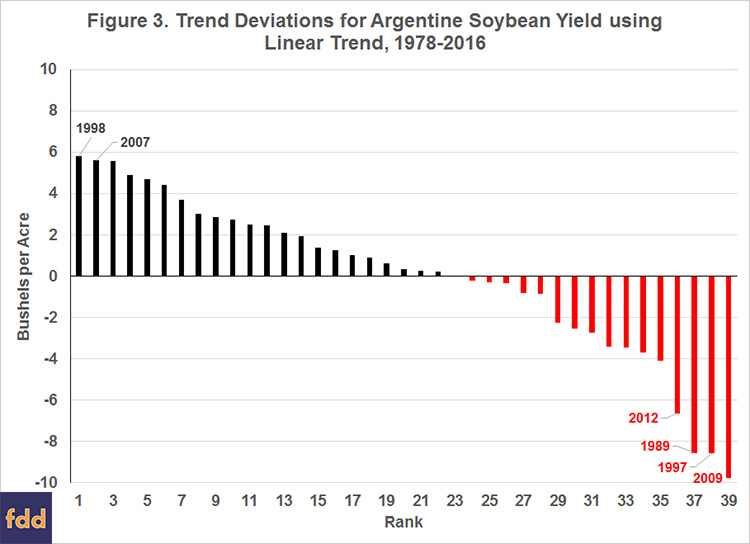 An examination of the national average soybean yields in Argentina for the period 1978 through 2016 reveals an upward yield trend with substantial annual variation. The estimated linear yield trend points to a 2017 average soybean yield of 42.2 bushels per acre, 1.10 bushels below the 2016 average. Based on the projections of harvested acreage in the USDA’s January 12, 2017 World Agricultural Production report, yield at trend value for Argentina points to a 2017 crop of 2.03 billion bushels, 57 million bushels (2.73 percent) smaller than the 2016 crop. Using estimates of the historical yield trend deviations, we estimate there is an unconditional probability of 62 percent of a two bushel trend deviation. A trend yield deviation of two bushels per acre would add or subtract approximately 96 million bushels to our projection of Argentina’s 2017 production.