In a farmdoc daily article almost five years ago (November 2, 2012), we argued that, “…the new era of higher crop prices could be extended well into the future as a result of the RFS for advanced biofuels that in all likelihood can only be met with a rapid expansion in biodiesel production.” In the same article, we projected that over 3 billion gallons of biodiesel production would be needed in the future to meet the RFS mandates and this would require over 20 billion pounds of feedstock. The article concluded with this statement, “The new price era, then, would not be extended by rising corn demand, but by rising vegetable oil demand.” In essence, we argued that a boom in biodiesel production would cause a boom in the price of the main feedstock–soybean oil–which would in turn support soybean prices.

Our 2012 projection of the amount of biodiesel needed to comply with the RFS mandates in the future turned out to be reasonably accurate. For example, we recently estimated the total amount of biomass-based diesel (biodiesel + renewable diesel) supplied in the U.S. and needed for RFS compliance in 2016 was 2.8 billion gallons (farmdoc daily, July 19, 2017). Therefore, the U.S. did in fact have the boom in biodiesel production that we foresaw five years ago. As highlighted above, this naturally leads to the question of the impact of the biodiesel boom on soybean oil prices. This is a question much on the minds of market participants and policymakers in recent years. The purpose of today’s article is to provide a careful analysis of the short- and long-term relationship between biodiesel and soybean oil prices. This continues the recent series of farmdoc daily articles (July 12, 2017; July 19, 2017; July 26,2017; August 9, 2017; August 16, 2017; August 23, 2017; August 30, 2017) that examine the role that biodiesel (or biomass-based diesel) plays with respect to compliance with RFS mandates. 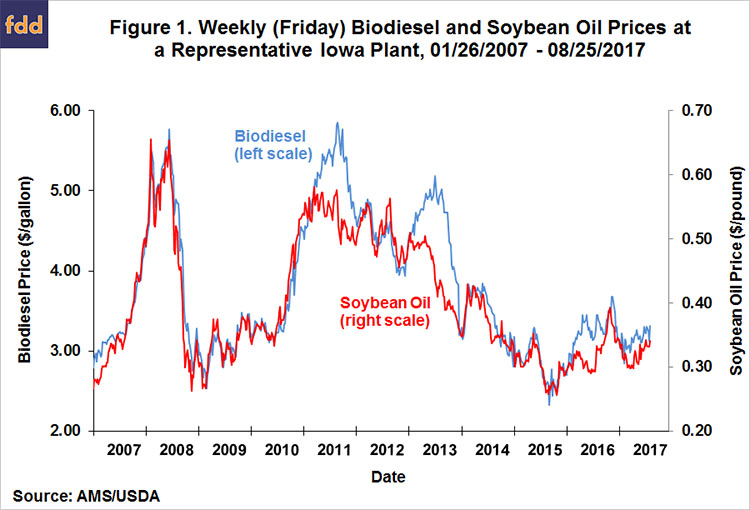 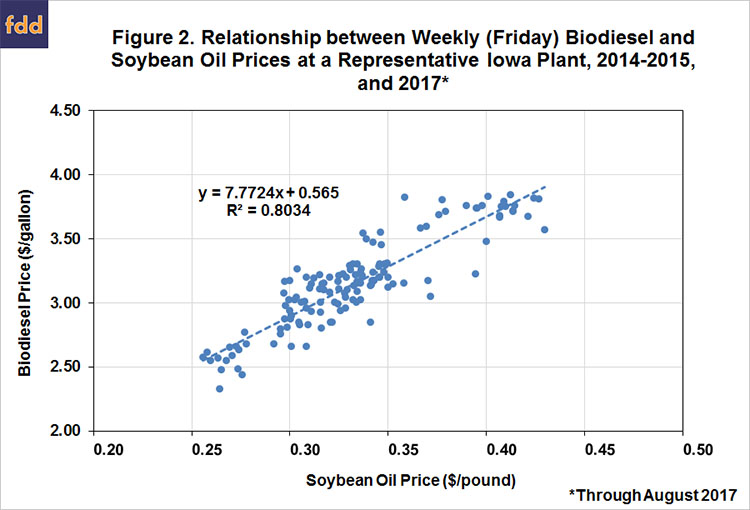 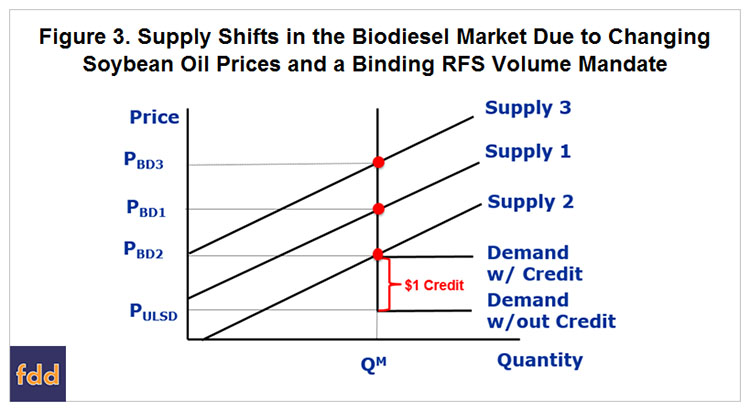 Standard Granger causality regressions were estimated using the weekly soybean oil and biodiesel prices data over 2014, 2015, and 2017 to date, with the following results: 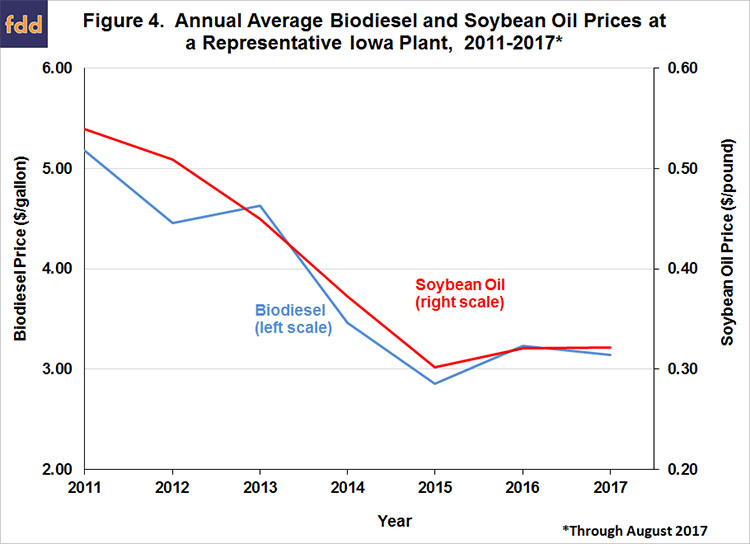 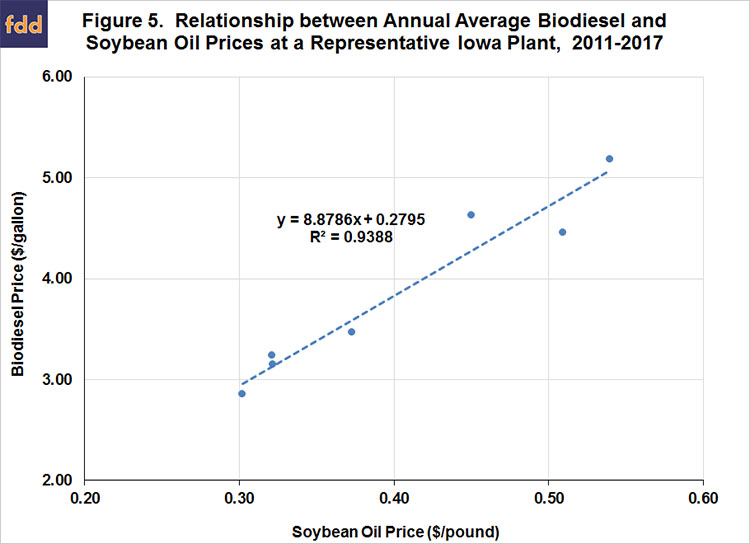 If “correlation does not necessarily imply causation” at the weekly time horizon, then this should be doubly true at the annual horizon because we know that the biodiesel mandate has increased each year over 2011-2017, and in some years, substantially. The situation is represented in Figure 6, which is the same model as in Figure 3, except the RFS biodiesel mandate increases from QM to QM*. In this scenario, it is not possible to a priori establish the direction of causality because both the supply and demand curves are shifting. Consequently, the soybean oil and biodiesel prices may both drive each other in a classic simultaneous manner.

Before discussing the estimation results, it must be emphasized that the results should be treated extremely cautiously due to the very small sample size of seven observations. This is substantially fewer observations than typically recommended for this type of test. Despite the obvious limitation, the similarity of the annual results to the weekly results is striking. In particular, the previous year’s soybean oil price in (3) is significantly related to this year’s biodiesel price, while last year’s biodiesel price in (4) is not significantly related to this year’s soybean oil price. The statistical significance and size of the coefficient on lagged soybean oil prices in (3) is rather remarkable considering the tiny sample size, and provides clear evidence that the annual variation in supply shifts due to changing soybean oil prices has more than outweighed the annual variation in demand shifts due to changing RFS biodiesel mandates. 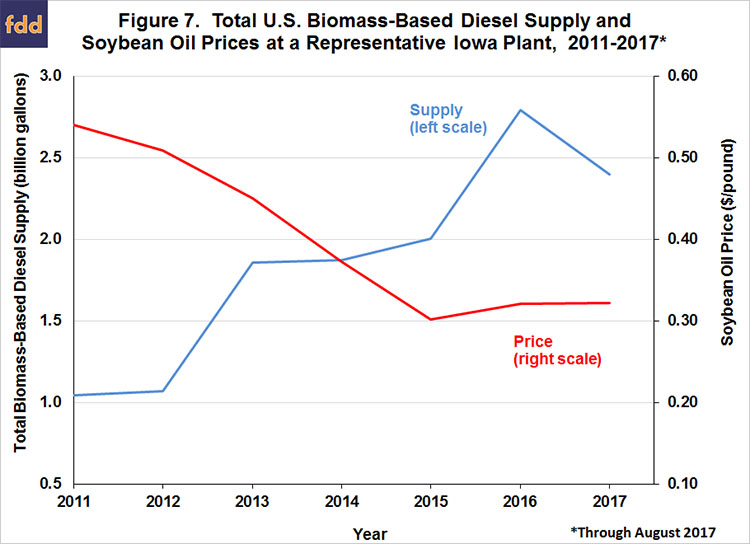 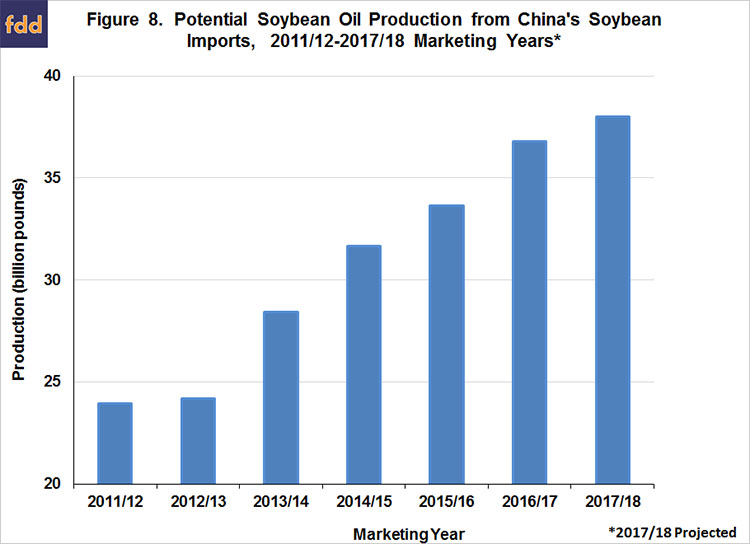 So, we are left with a major riddle as to how U.S. biodiesel requirements could increase so sharply and soybean oil prices could decline so much. The answer has to be in the supply of soybean oil. A key insight is that soybean oil and soybean meal are joint products produced in fixed proportions when soybeans are crushed. Traditionally, meal used in animal feed rations has been by far and away the most important source of the value of a bushel of soybeans. As almost everyone knows there has been an enormous boom in soybean exports to China to provide soybean meal in feed rations for its burgeoning livestock herds (mainly pork and chickens). What is less appreciated is the supply of soybean oil that has been produced as part of the “soybean meal” boom in China. Figure 8 illustrates the potential scale of the increase in global soybean oil supply from this boom. We computed the volume of soybean oil produced assuming every bushel of China’s soybean imports was crushed into meal and oil. Since 2011, China’s potential production of soybean oil from its soybean imports alone has increased over 14 billion gallons. This exceeds the increase in total soybean oil requirements computed above for the RFS biodiesel mandates. Of course, this simplistic analysis does not take into account the adjustments that could have taken place with China’s domestic soybean production and crushing, as well as in other parts of the world. The point still stands though : China’s soybean import boom has been so large that the resulting increase in global soybean oil supplies has allowed the U.S. boom in biodiesel production to take place without causing a corresponding boom in soybean oil prices.

Irwin, S. and D. Good. "How to Think About Biodiesel RINs Prices under Different Policies." farmdoc daily (7):154, Department of Agricultural and Consumer Economics, University of Illinois at Urbana-Champaign, August 23, 2017.

Irwin, S and D. Good. "Filling the Gaps in the Renewable Fuels Standard with Biodiesel." farmdoc daily (7):130, Department of Agricultural and Consumer Economics, University of Illinois at Urbana-Champaign, July 19, 2017.

Irwin, S and D. Good. "The Biofuels Era - A Changing of the Guard?" farmdoc daily (2):214, Department of Agricultural and Consumer Economics, University of Illinois at Urbana-Champaign, November 2, 2012.