download PDF
May 25, 2022
farmdoc daily (12):77
Recommended citation format: Irwin, S. "What Do We Know About the Impact of Late Planting on U.S. Average Soybean Yield?" farmdoc daily (12):77, Department of Agricultural and Consumer Economics, University of Illinois at Urbana-Champaign, May 25, 2022. Permalink

We looked at several issues related to late planting for corn in recent series of farmdoc daily articles (April 14, 2022; April 21, 2022; April 28, 2022; May 9, 2022; May 19, 2022).  Similar concerns have been raised about delayed planting of soybeans due to cool, wet weather this spring.  Based on recent weekly Crop Progress reports from the USDA, planting progress for the 2022 U.S. soybean crop has been proceeding at a slower normal pace.  As of May 22nd, 50 percent of soybean acreage in 18 major producing states was planted, compared to a 5-year average for this week of 55 percent.  Soybean planting has been particularly late in the upper midwestern states of Minnesota, North Dakota, and South Dakota.  The purpose of this article is to examine what we know about the relationship between late planting and the U.S. average yield of soybeans.

In order to set the late planting cutoff date in our earlier work (farmdoc daily, May 2, 2018; June 6, 2019; May 20, 2020), we reviewed information generated from agronomic research relating planting date to soybean yields at the farm-level.  Results from soybean planting date research for different years and different locations vary throughout the U.S., but the evidence indicates planting on or before May 1 generally is associated with higher yield.  De Bruin and Pederson (2008) provide widely-cited evidence in this regard for Iowa and also highlight earlier studies from the 1980s and 1990s that showed the benefits of earlier planting of soybeans in the upper Midwest of the U.S.  Early planting benefits are not limited to the Midwest.  A veritable revolution has occurred in the Mid-South and Delta regions in the last 25 years regarding soybean planting dates (e.g., farmdoc daily, May 10, 2017).

We follow our earlier work and specify the beginning date for substantial late planting penalties on soybean yield in the U.S. to be June 5th from 1980-1985, May 30th from 1986-1999 and May 25th from 2000 forward.  One can certainly argue for an earlier cutoff date in later years, e.g., May 10th, in the heart of the Corn Belt based on planting date studies.  However, we opt for the May 25th date in light of the large shift in soybean acreage in the far northern parts of the Corn Belt and the later date of the optimal planting windows in these areas.  This also keeps the cutoff date for soybean late planting after the cutoff date for corn (May 20th), consistent with the behavior of U.S. farmers in planting the two crops.

Figure 1 shows the percentage of soybeans planted late in the U.S. over 1980-2021 based on the cutoff dates specified above.  On average, late planting based on this measure was 39.2 percent, with the bulk of the observations between about 20 and 50 percent.  There is no evidence of a trend up or down over time in the late planting percentage using our cutoff dates, which results in a stable measure of late planting.  The average level of late planting for soybeans, 38.7 percent, is much higher than for corn, 17.6 percent, that we reported in the farmdoc daily article of April 28, 2022.  At least half of this difference can be attributed to double-crop planting of soybeans.  Late-planted soybean acreage in 2019 came in at the highest total since 1980 with 72 percent remaining to be planted as of May 25.  While 2019 was the highest in the sample period, late planting was almost as high in two other years (1990 and 1995).  Late planting has been below average in each of the last two years. 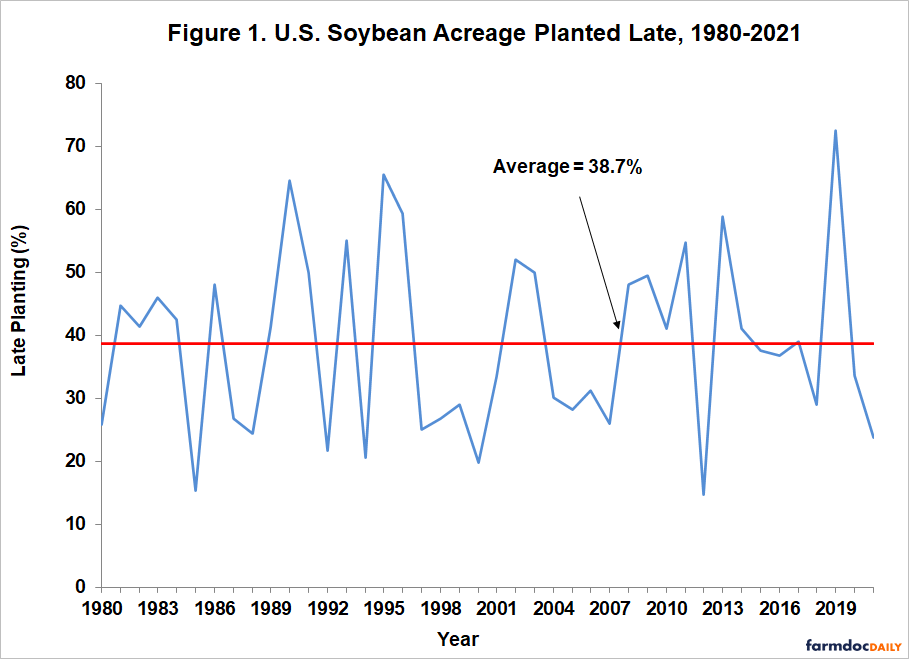 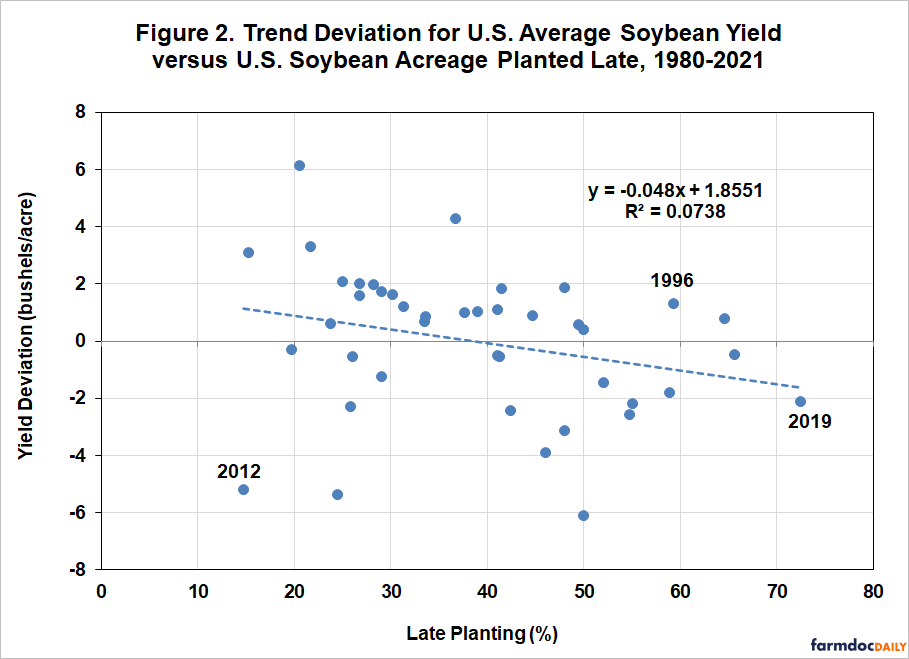 It is important to emphasize that the explanatory power of the regression model in Figure 2 is quite low, as the R2 is only 7.4 percent.  Because of this low explanatory power, the regression model in Figure 2 should be treated with a good deal of caution.  This does not mean that late planting should be ignored when projecting soybean yield, but rather, other factors, in particular summer weather, are typically more important in explaining deviations from trend yield.  Two years provide good examples.  Late planting was well above average in 1996 but the soybean yield was still above trend due to favorable summer weather conditions.  Conversely, late planting in 2012 was at the low end of the sample range but the soybean yield was extremely low relative to trend due to the severe drought that summer.

Since several factors influence the magnitude of the U.S. average soybean yield in any given year, particularly summer weather conditions, it is important to jointly consider all of the relevant factors in order to quantify the impact of late planting.  In technical terms, this means that the regression model in Figure 2 may suffer from “omitted variable bias.”  We addressed this problem by estimating a crop weather regression model in earlier work (farmdoc daily, May 20, 2020) that relates the U.S. average soybean yield to trend, the percentage of the crop planted late, and an array of weather variables.  The regression model estimates indicate that the U.S. average soybean yield decreased by 0.7 bushels per acre for each 10 percent of the crop that is planted late, close to the estimate from the simple bivariate model presented in Figure 2.

We next compare the late planting results found in Figure 2 with agronomic field trials for planting dates in Illinois (farmdoc daily, April 14, 2022).  Figure 3 presents the results from 33 northern, central, and southern Illinois field trial locations over 2007-2020.  Data from these experimental field trials reveal two key patterns.  First, there is a relatively wide time window for planting soybeans in Illinois and expecting “normal” yields.  This window runs from roughly early April though early May.  Second, the yield penalty is non-linear and increases sharply for planting past mid-May, with reductions as large as 20 to 30 percent. 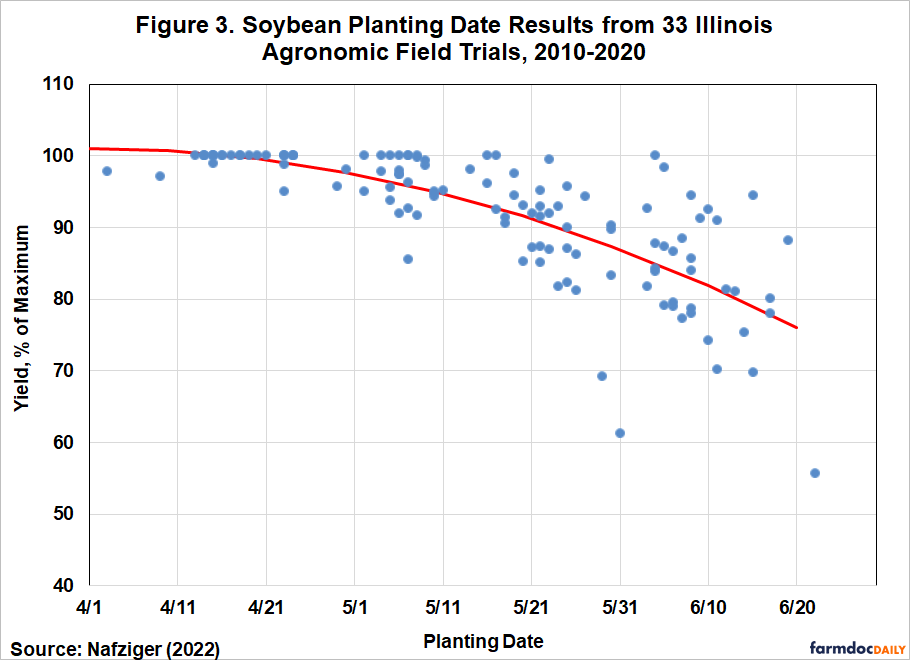 Comparison of Figures 2 and 3 reveals the same puzzling difference in results as we found in corn (farmdoc daily, April 28, 2022; May 9, 2022).  Specifically, the estimated size of late planting impacts from regression studies is linear and fairly small when compared to the non-linear and large late planting impacts based on agronomic field trials.  We previously hypothesized several possible reasons for the differences (farmdoc daily, May 9, 2022):

Irwin, S. "Does the Correlation Between Spring and Summer Weather Explain the Puzzling Results on Late Planting and Corn Yield?" farmdoc daily (12):73, Department of Agricultural and Consumer Economics, University of Illinois at Urbana-Champaign, May 19, 2022.

Irwin, S. "The Impact of Late Planting on the State Average Yield of Corn in Illinois." farmdoc daily (12):66, Department of Agricultural and Consumer Economics, University of Illinois at Urbana-Champaign, May 9, 2022.

Irwin, S. "What Do We Know About the Impact of Late Planting on the U.S. Average Corn Yield?" farmdoc daily (12):59, Department of Agricultural and Consumer Economics, University of Illinois at Urbana-Champaign, April 28, 2022.

Irwin, S. "What Do We Know About How Long It Takes to Plant the U.S. Corn Crop?" farmdoc daily (12):54, Department of Agricultural and Consumer Economics, University of Illinois at Urbana-Champaign, April 21, 2022.

Irwin, S. and T. Hubbs. "Prospects for Timely Planting of the 2018 Soybean Crop." farmdoc daily (8):79, Department of Agricultural and Consumer Economics, University of Illinois at Urbana-Champaign, May 2, 2018