The USDA released the 2022 Prospective Plantings report on March 31st.  The report indicated that U.S. farmers this year intended to plant 89.5 million acres of corn, 91.0 million acres of soybeans, and 317.4 million acres for all principal crops.  These estimates were bullish for corn and bearish for soybeans, as the market was expecting a larger acreage for corn and lower acreage for soybeans.  Market attention has now shifted to the annual June Acreage report from the USDA, which will be released on Thursday of this week.  There is always much discussion about how USDA planted acreage estimates may be revised, and this year is no exception, particularly given the historically high grain prices and tight market conditions.  The purpose of this article is to review what we know about revisions to USDA planted acreage estimates based on our previous research on the topic.

The analysis here focuses on USDA planted acreage revisions between the March Prospective Plantings and the January Crop Production Annual Summary reports.  The January estimate is usually considered the “final” for a crop year.  Hence, the change in estimates between March and January is the most relevant measure of the total revision for a crop year to the market.  In our previous work, we examined USDA planted acreage revisions for corn, soybeans, combined corn and soybeans, and all principal crops (farmdoc daily, April 14, 2021; April 21, 2021; April 28, 2021; May 19, 2021).  Since the results are generally similar for these four series of acreage revisions, we focus the discussion here on corn acreage revisions in order to preserve space. We update our previous results for corn with data for 2021.  It also should be kept in mind that we have not examined acreage revisions for all of the dozens of crops that the USDA includes in acreage reports.  Nonetheless, we expect that the results for corn, soybeans, combined corn and soybeans, and principal crops are representative of most crops.

We draw four main findings from our analysis of USDA planted acreage revisions:

Figure 1 shows revisions to USDA planted acreage estimates for corn over 1990-2021.  Revisions are computed as the January estimate minus the March estimate, so positive numbers mean that planted acreage estimates increase between March and January, and vice versa.  The first thing to notice is how close the average revision, -0.4 million acres, is to zero.  It is no surprise that the average is not significantly different from zero.  Hence, from a statistical standpoint, the data indicate that the average revision for corn acreage estimates is equal to zero.  This is exactly what you would expect from a statistical revision process that is unbiased. 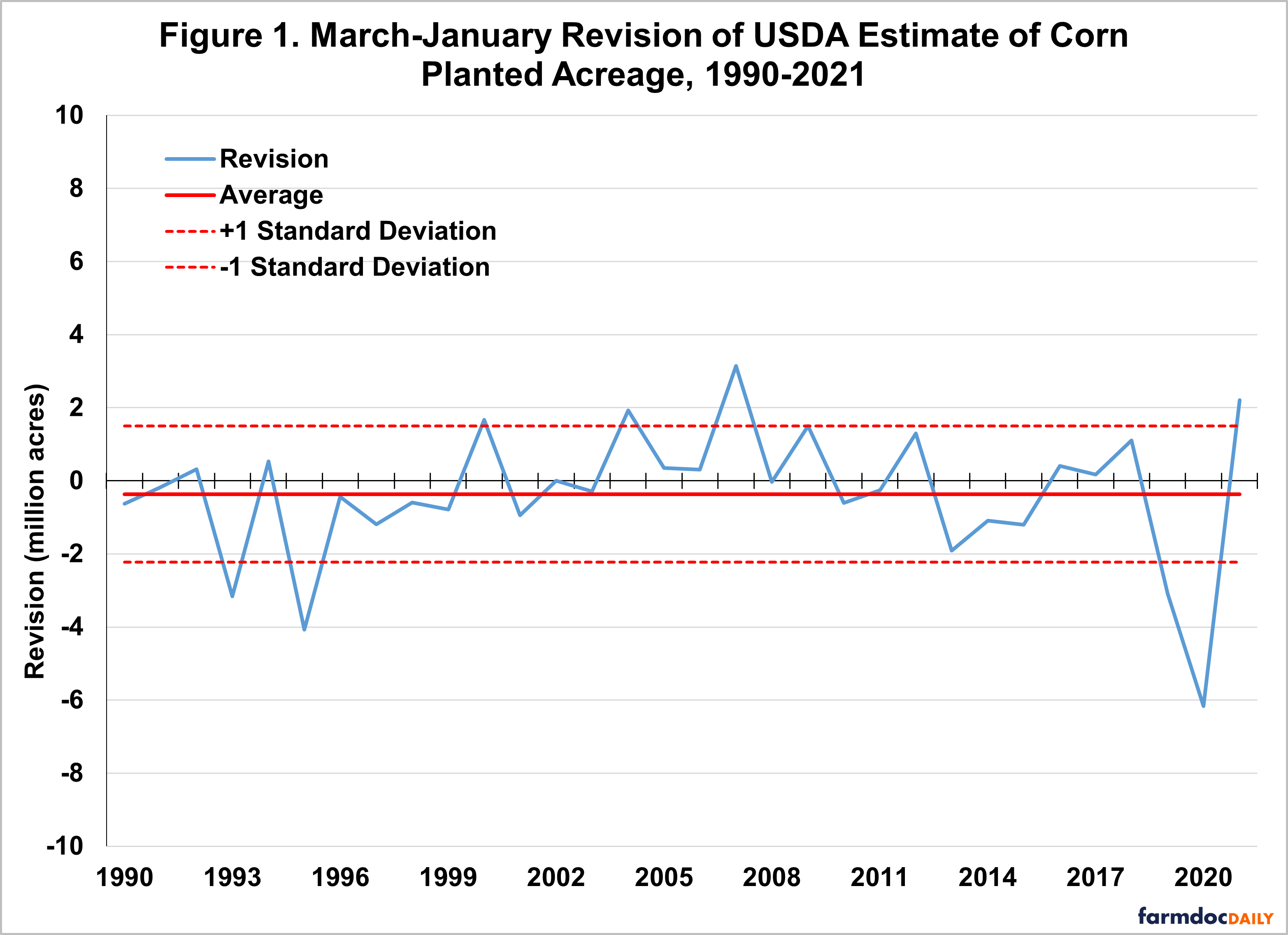 The fact that revisions to USDA planted acreage are unbiased, does not imply that revisions in any given year are small.  This is highlighted in Figure 1 by the plus/minus one standard deviation bands around the average revision.  With a standard deviation of 1.9 million acres, the bands are roughly plus/minus two million acres.  In other words, it is not unusual for the initial planted acreage estimates for corn found in the March Prospective Plantings report to be revised upward or downward as much as two million acres.  The implication is that we should expect fairly substantial acreage revisions in any given year, but over time, the positives and negatives balance out.

It is normal that all acres intended to be planted to crops ends up actually being planted due to weather delays and natural disasters such as flooding.  Prevented plant coverage under the Federal crop insurance program provides payments when farmers are unable to plant within a normal time window (e.g., farmdoc daily, May 14, 2019).  It is reasonable to assume that survey respondents to the March Prospective Plantings report expect zero acres of prevented plant for their farm operations.  The implication is that USDA March planting intentions represent the sum of what will actually be planted and prevented plant.  It then follows that the revision of USDA planted acreage estimates between March and January should, on average, equal the magnitude of prevented plant acreage.  So long as prevented plant acreage is positive, then the USDA March planting intention estimate should not be an unbiased estimate of the January final planted acreage estimate.  These two should differ, on average, by the amount of prevented plant acreage.  It is quite puzzling why this is not actually the case, as reviewed above in point #1. 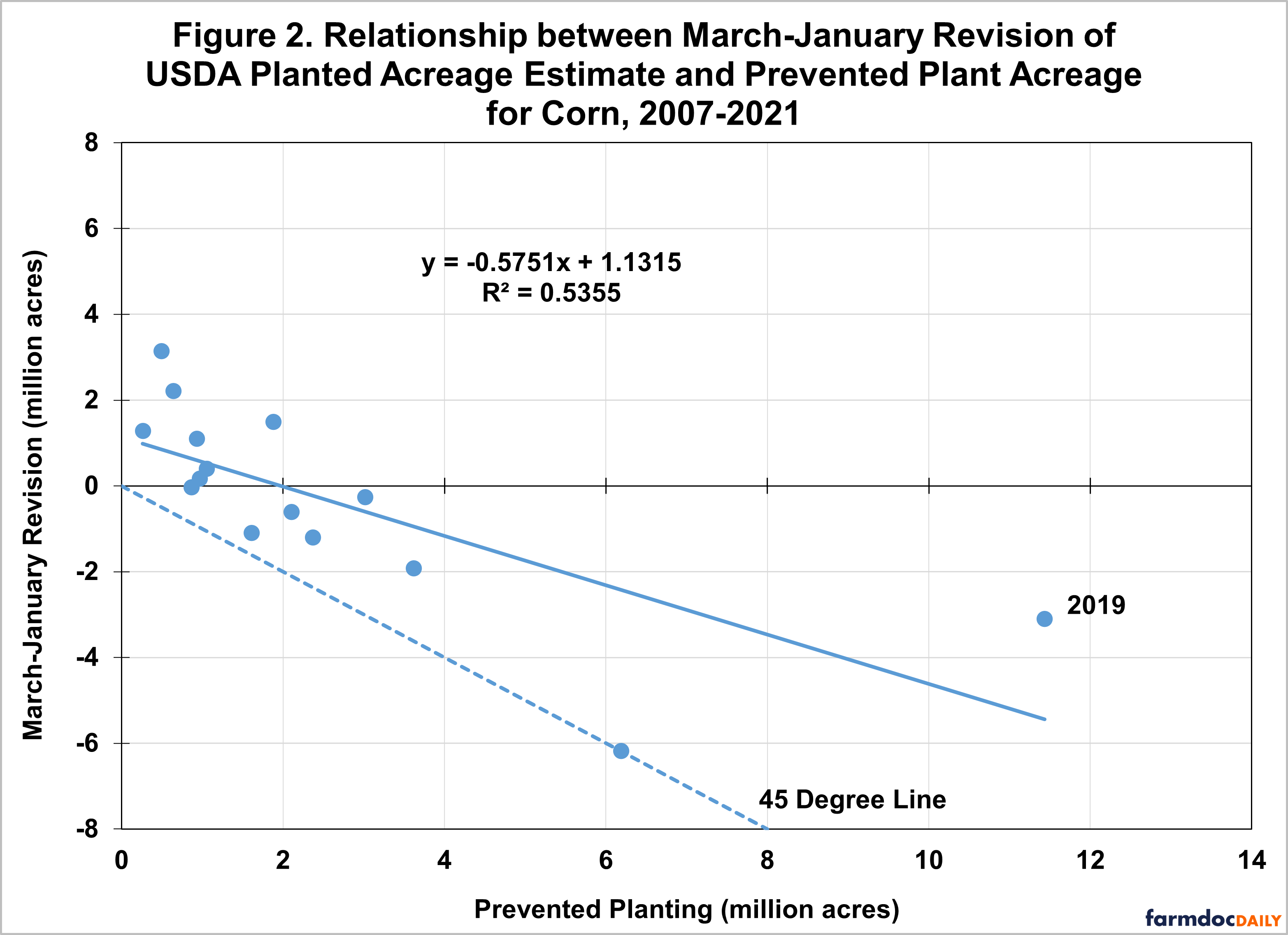 It is frequently argued that the grain markets “buy” or “sell” planted acreage during the spring planting period through increasing or decreasing, respectively, new crop futures prices.  In this regard, we consider the relationship between USDA corn acreage revisions and price changes during the two-month period that immediately follows the release of the March Prospective Plantings report.  Specifically, we collect new crop futures prices for corn on the business day immediately following the release of the Prospective Plantings report and the last business day of May.  The day following the release of the Prospective Plantings report is used as the base for computing percentage price changes over the two-month April-May period.  The April-May period brackets the period when the vast majority of adjustments in corn and soybean acreage decisions can be made in response to price changes.  Figure 3 shows the revisions to USDA planted acreage estimates for corn over 1990-2021 and new crop futures prices changes in April-May.  There is no evidence of a statistical relationship, with an R2 of essentially zero.  New crop futures price changes over April-May have no ability to predict USDA corn and soybean acreage revisions. 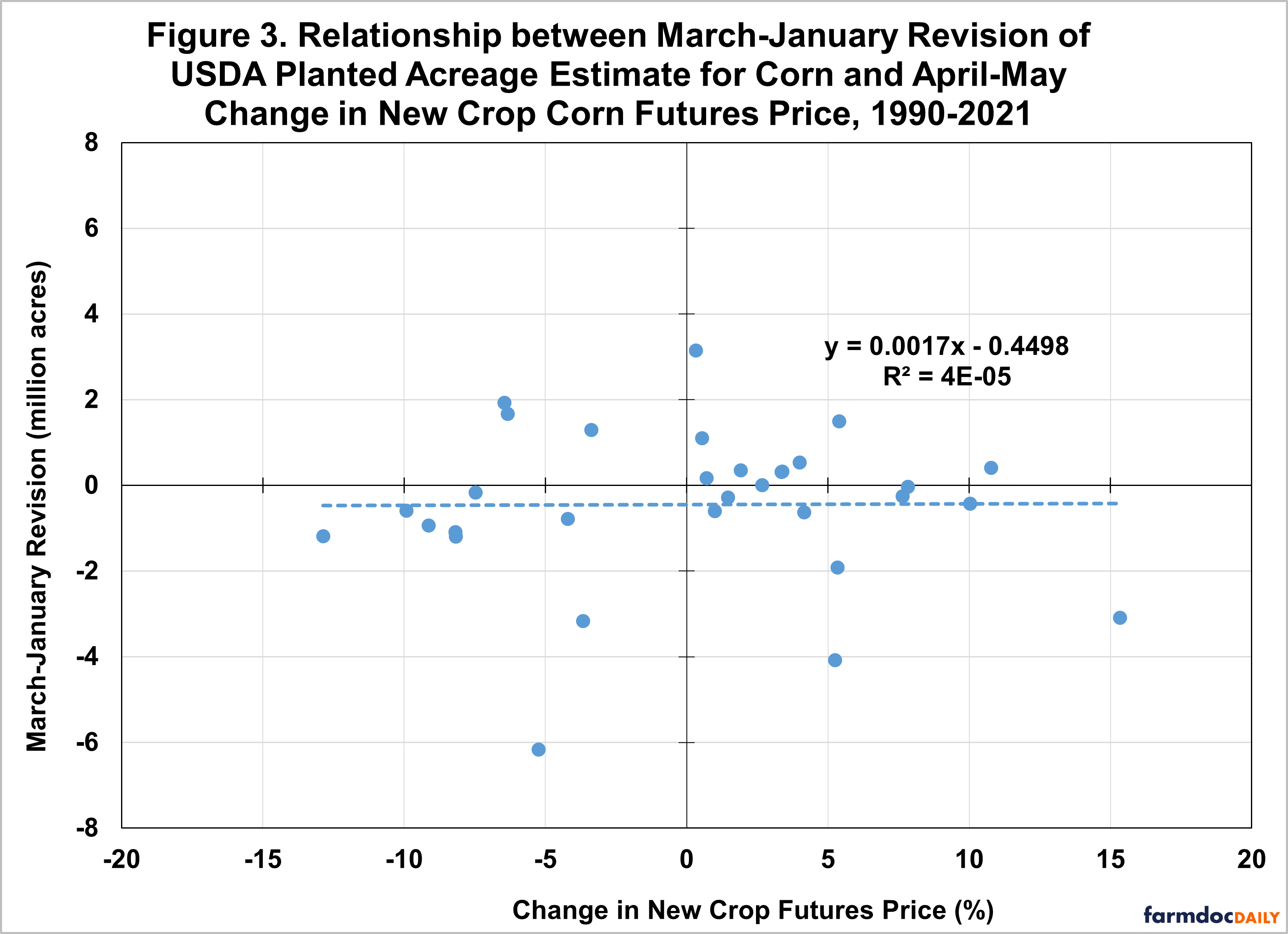 An important question for market participants is how much of the total revision over March-January occurs in March-June compared to June-January.  This amounts to asking how much of the total acreage revision is revealed in the June Acreage report.  Figure 4 shows the relationship between the March-June acreage revision for corn and the total March-January revision.  The R2 for the regression is 88 percent, which shows that all but a small proportion of the total revision is revealed in the June Acreage report.  The same regression for soybeans, combined corn and soybeans, and principal crops has an R2 of 77, 83, and 75 percent, respectively.  It is not surprising then why the June Acreage report is considered to be such an important event by the market. 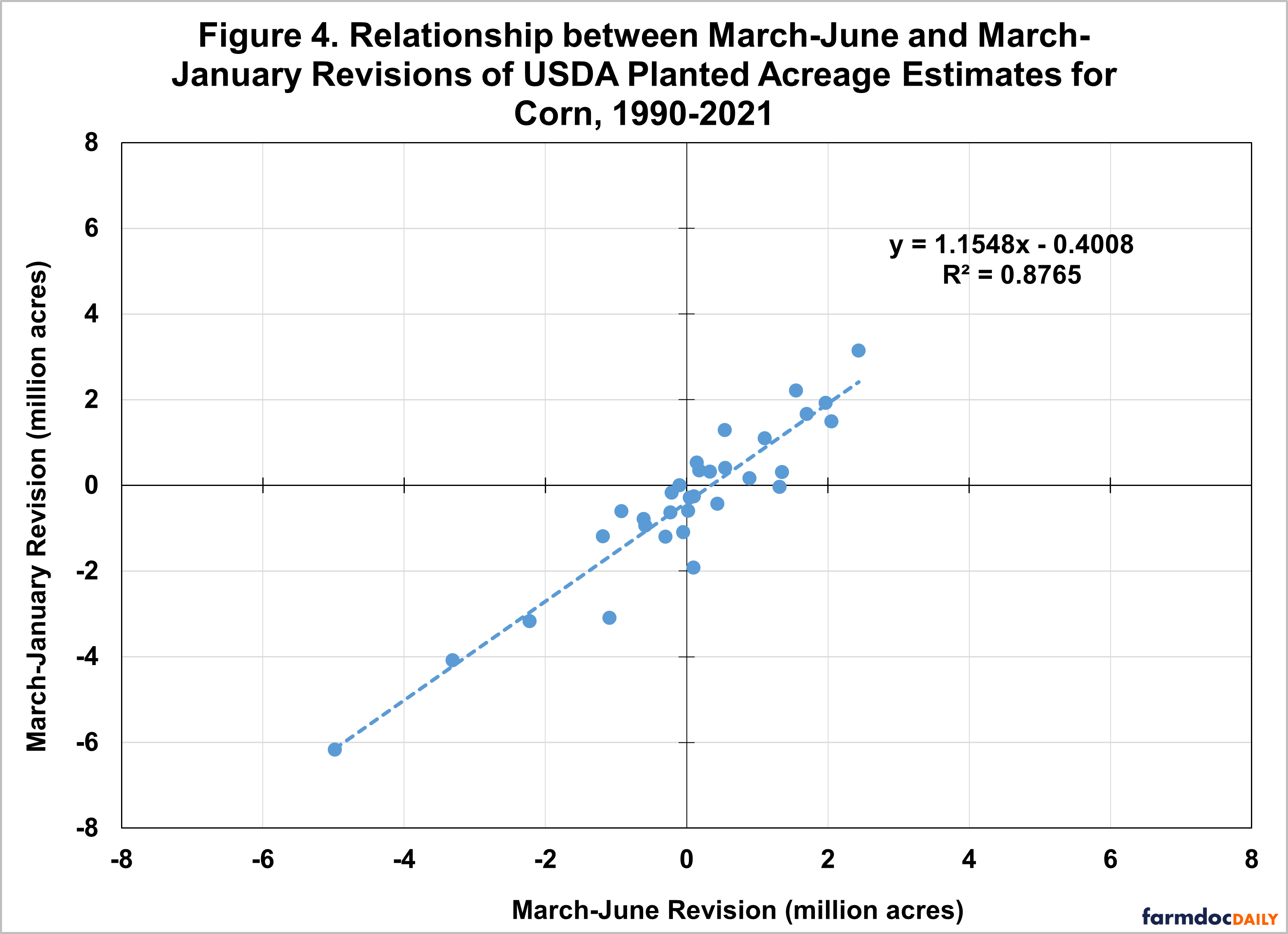 Irwin, S. "Anticipating USDA Planted Acreage Revisions for Corn and Soybeans in 2021." farmdoc daily (11):81, Department of Agricultural and Consumer Economics, University of Illinois at Urbana-Champaign, May 19, 2021.

Irwin, S. "The Relationship of USDA Planted Acreage Revisions for Corn and Soybeans to Changes in Price and Planting Progress." farmdoc daily (11):65, Department of Agricultural and Consumer Economics, University of Illinois at Urbana-Champaign, April 21, 2021.