The role of farm prices in US price inflation is examined.  During the last half of the 20th Century, crop, and animal and animal product prices increased less than average US prices except early in the high inflation of 1973-1982.  In the 21st Century, farm prices have increased more than average US prices.  This change coincides with a gap that emerged as consumption grew faster than yields of food grains, feed grains, and oilseeds.  This gap, which has increased over time, suggests farm prices will likely increase as fast as average US inflation for some time into the future.

The US Department of Agriculture compiles an index of prices paid to all crops and all animals and animal products (subsequently, referred to as animals) sold in the US.  The US Bureau of Labor Statistics compiles a Producer Price Index (PPI) and Consumer Price Index (CPI).  PPI is a family of indexes that measures prices paid to domestic producers for domestic production by all good-producing sectors of the US economy (mining, manufacturing, agriculture, fishing, and forestry), as well as for domestic output of the US natural gas, electricity, and construction sectors.  CPI measures prices paid by domestic consumers.  Analysis period is 1953 to 2022.  Starting with 1953 allows time for post-World War II adjustments in the US economy.  Annual data are used.  For 2022, an average of data released so far is used.

Ratio of prices received by US farmers for crops and animals to the all sector PPI index was computed to examine relative change in farm prices to all US producer prices.  Highest ratio over the study period was 1.80 in 1974 for crops and 2.13 for animals in 1973 (see Figure 1).  Both ratios then declined sharply through the early 1980s.  The decline continued, but more slowly, until the early 2000s.  Overall, during the last half of the 20th Century, farm prices increased less than the average of all US prices.  Thus, farm prices generally moderated US producer price inflation.  However, during the 21st Century both farm-to-PPI ratios have moved erratically with no obvious trend. 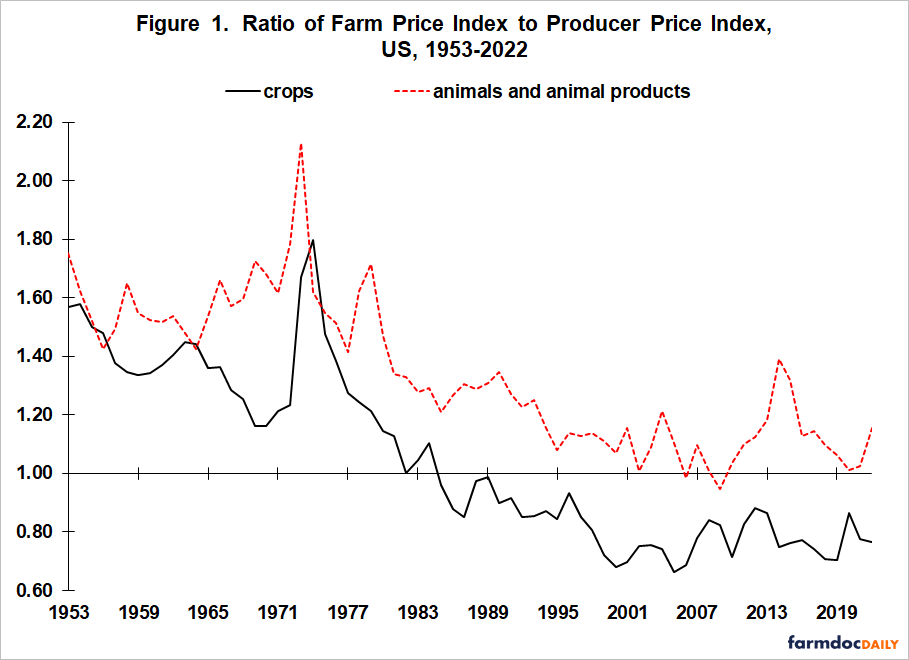 To provide additional perspective on the relative behavior of farm prices, we compare average annual percent change in prices at various stages in the farm-to-food chain as well as in CPI and all-sector PPI.  In the last half of the 20th Century, crop and animal prices increased notably less than the other price groups, with producer prices increasing less than consumer prices (see Figure 2).  These relationships have inverted in the 21st Century.  Crop and livestock prices have increased the most, with producer prices increasing more than consumer prices.  Figure 2 implies that farm prices have likely put upward pressure on average consumer price inflation in the 21st Century. 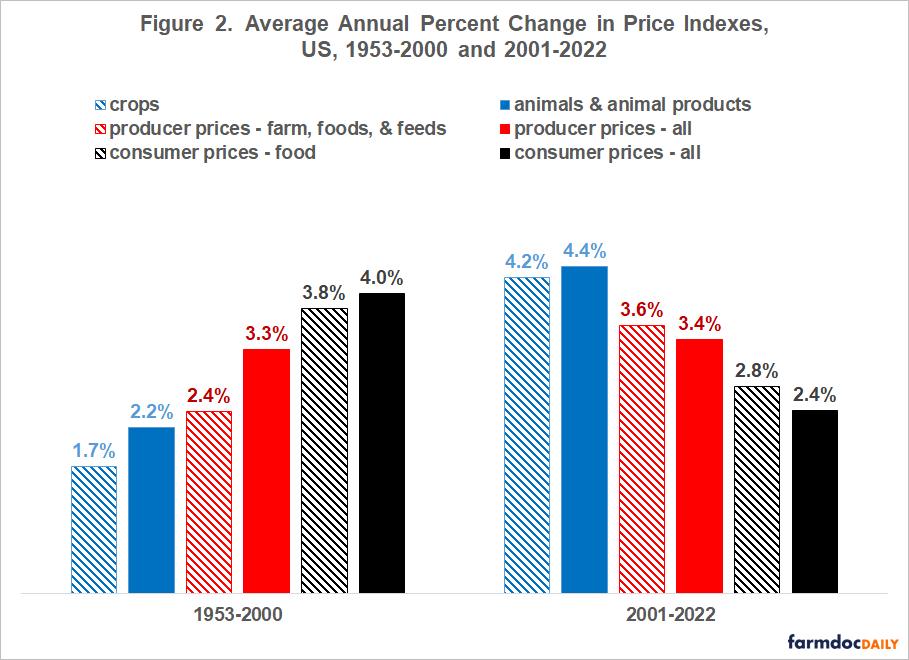 In both periods crop prices increased less than livestock prices on average.  This relationship was expected as both domestic and export demand for animal protein has been strong since 1950.

Figures 1 and 2 are of current interest because, since the early 2000s the world has needed more land each year to satisfy its increasing use of feed grains, oilseeds, and food grains (see farmdoc daily November 16, 2022).  A US yield gap also began to emerge around 2000 (see farmdoc daily, November 21, 2022).  Returns for producing crops must be high enough to cover the cost of bringing new land into production.  Higher farm prices usually provide some or all of this incentive.  The on-going need for roughly 16 million acres each year by World agriculture (see farmdoc daily, December 19, 2022) and the current US yield-consumption gap implies that, unlike the last half of the 20th Century, farm prices are unlikely to moderate US producer or consumer inflation for some time in the 21st Century.

The change coincides with a gap that emerged around 2000 due to consumption of field crops growing faster than yields in the US and the World.

This consumption-yield gap, which is increasing, suggests that farm prices are unlikely to moderate US inflation into the future.

Echoing the conclusion in the January 11 and January 18, 2023 farmdoc dailies that examined the role of labor and producer prices, respectively, in current inflation; higher interest rates (i.e. Federal Reserve policy) is only part of the solution.  To reduce farm price inflation over time and thus its contribution to overall inflation, investment in yield and multiple cropping research is a key (see farmdoc daily, May 2, 2022 for more discussion of this need).