Corn processed into alcohol for fuel was not a factor in the 1970 period of farm prosperity. The U.S. Department of Agriculture’s (USDA) data series on this demand component does not start until 1980 (see here). Figure 1 presents the share of total corn use in the U.S. that was processed into fuel alcohol for the 1980 through 2012 crops. Corn used for fuel alcohol is net of the feed byproduct that comes from the distillation process. Specifically, 29% of the amount of corn processed into fuel alcohol is assumed to be used as feed for livestock. While estimates of this adjustment factor vary, 29% is reasonable based on current information. 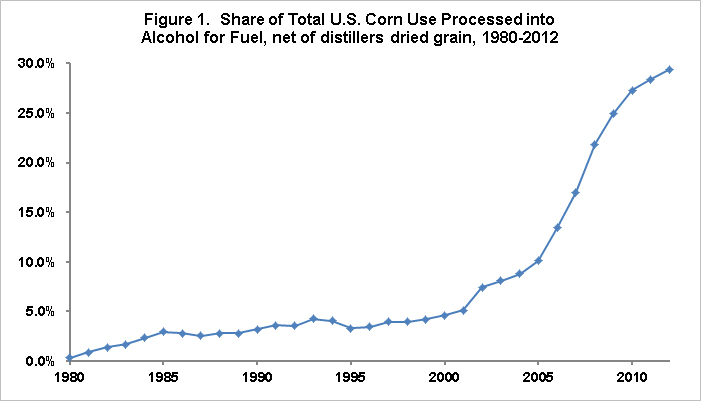 Alcohol for Fuel vs. China

Increased demand for food was a key factor in both the 1970 and current period of farm prosperity. In the 1970s, the leading source of this demand was the Soviet Union. During the current period, China is the leading source of this demand. However, as noted above, unlike the 1970s the current period has a second demand driver, the market for fuel alcohol. The existence of two demand drivers prompts the question: which is more important? To provide a simple perspective on this question, the quantity of U.S. corn processed into fuel alcohol, net of the feed byproduct, is expressed as U.S. harvested corn acres. This value is calculated by dividing corn used for fuel alcohol by the average U.S. yield harvested per corn acre during the crop year. Similarly, China’s imports of soybeans from the world (not just the U.S.) are converted into the number of harvested U.S. soybean acres. Included in China’s soybean imports is the soybean equivalent of the amount of soyoil it imported. China’s imports are from here while U.S. harvested yields are from here. The authors would like to thank Matt Roberts for his suggested use of these measures.

Government policy has been integral to the development and expansion of the fuel alcohol market for U.S. corn. Tax credits to promote the production and consumption of biofuels date to the 1970s. A tariff on imported ethanol began in the 1980s. Minimum consumption levels, known as Renewable Fuels Standards, were set by the Energy Policy Act of 2005, and then expanded by the Energy Independence and Security Act of 2007. The federal tax credit and import tariff however were allowed to expire on December 31, 2011.

While policy is unquestionably important, focusing on policy misses the bigger picture. Figure 3 presents the ratio of U.S. average corn price to the U.S. average first purchase price of crude oil. To facilitate the presentation, this ratio is benchmarked to the average value of this ratio from 1925 through 1929. This benchmark period is selected because it predates the impact of the Great Depression, which began in late 1929, and the subsequent enactment of farm price support policy beginning in 1933. Corn prices are from the USDA, National Agricultural Statistics Service available here. Crude oil prices are from the U.S. Energy Information Agency available here. 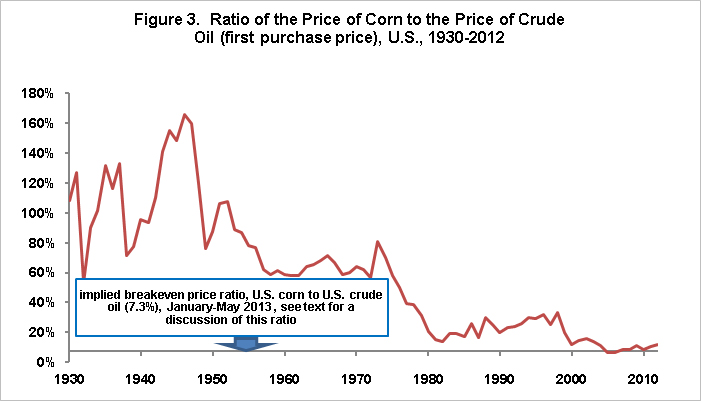 Since 1925-1929, the benchmarked ratio of U.S. corn price to U.S. first purchase price of crude oil has declined from 100% to 12% during the current 2012 crop year. The lowest ratio occurred in 2006 at 6%. The decline was not continuous but largely occurred in 3 steps. The first occurred during 1952-1957 as corn prices declined. This decline in corn price was caused by a transition for U.S. policy for corn from the high fixed price supports of World War II and the Korean War to lower, more market-oriented price supports. The second and third steps occurred during 1975-1979 and 1998-2004, respectively; with the primary reason being increasing oil prices. Even the high corn prices of the last two years have not reversed the third step.

According to Iowa State University’s Ethanol Profitability Model, available here; a net return of 8 cents per bushel of corn above all costs existed for the production of fuel alcohol over the period of January through May 2013. During this period of roughly breakeven production of ethanol, the ratio of U.S. corn price to U.S. first purchase price of oil was 7.4%. Adjusting for the 8 cent profit margin results in an implied corn-to-crude oil breakeven price ratio of 7.3%. The price ratio of corn to crude oil was below this value in 2005 and 2006 (see Figure 3). Moreover, using USDA’s current forecast of the 2013 crop year corn price of $4.90 per bushel and the January through May 2013 average U.S. first purchase crude oil price of $95.10 per barrel results in a ratio of 5.2%.

While many critical assumptions underlie the 7.3% breakeven ratio, including the price of oil, corn, and natural gas as well as the efficiency of the fuel alcohol conversion process; Figure 3 suggests that the long-term decline in the price of U.S. corn relative to U.S. crude oil has reached the point where corn is at the least close to being a competitive source of energy without any government subsidy. By focusing on the role of policy, it is easy to miss the long term change in corn’s competitiveness as a source of fuel energy.

While government policy’s role in creating incentives for the fuel alcohol demand driver is important to acknowledge and understand, it also important to note that, given the continuation of current conditions, U.S. corn is now close to a point of non-subsidized competitiveness with crude oil as a source of energy. If this situation has indeed been reached, it represents a fundamental turning point for crop agriculture by opening up a market-sustainable source of non-food demand. It would be a paradigm shift with regard to farming, food, and agriculture. Paradigm shifts invariably set in motion a series of changes that are difficult to foresee but usually result in a major redefinition of the sector as an economic engine and in the way that public policy is conducted toward the sector.

The next post in this series will provide a summary of the various posts, along with implications.