As noted in several previous farmdoc daily articles (e.g., January 28, 2015; February 11, 2016, March 1, 2017) the U.S. biodiesel production industry has a distinct “feast or famine” pattern in terms of profitability. The industry made very large profits in 2011 and 2013 and moderate profits in 2016, but losses in most other years. The feast or famine pattern is closely tied to expiration of the $1 per gallon biodiesel tax credit in the face of binding RFS biodiesel mandates. Diesel blenders can effectively purchase biodiesel at a discount in the year when the credit is scheduled to expire in order to meet mandates in later years. Outside of these “spike” years, losses are the norm because the U.S. biodiesel production industry is over-built and there is ample slack capacity that can be drawn upon as needed. What is interesting about the current situation is that biodiesel production profits turned increasingly positive during 2017; just the opposite of the “famine” tendency for years after the tax credit expires. The purpose of this article is to review biodiesel production profitability so far in 2017 and examine the possible reasons why profits have been much better than expected.

A model of a representative Iowa plant is used to assess biodiesel production profitability. Details on the latest version of the model can be found in the farmdoc daily article of March 1, 2017. Figure 1 presents the weekly (pre-tax) estimates of biodiesel profits over January 26, 2007 through June 16, 2017 based on the model assumptions. Two enormous spikes in 2011 and 2013 dominate the weekly profitability estimates, when profits exceeded $1 per gallon. There was also a spike in profitability in 2016 as well, but the peak was only about $0.50 per gallon. The average level of profits in 2011, 2013, and 2016 was $0.43, $0.50, and $0.15 per gallon, respectively. Excluding 2017, the average loss in other years was -$0.04 per gallon. Profits in 2017 were negative through February as would be expected based on the historical feast or famine pattern related to expiration of the biodiesel tax credit. Since March profits have risen steadily, reaching a peak of $0.25 per gallon in recent weeks. This has pulled the average profit for 2017 to date up to $0.04 per gallon. Please note that these profit estimates do not account for revenue associated with the retroactive reinstatement of the biodiesel tax credit, which can have a major impact on profits (farmdoc daily, March 29, 2017). This revenue source is not included because there is no comprehensive data on the nature of the marketing contracts governing any sharing of this revenue. 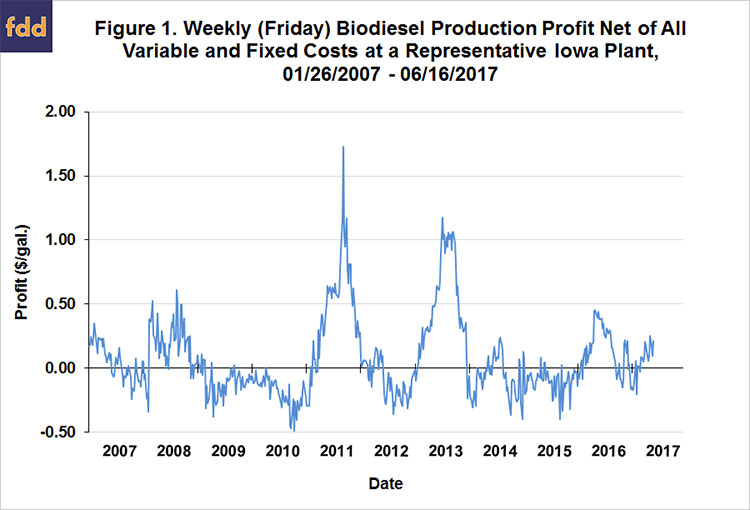 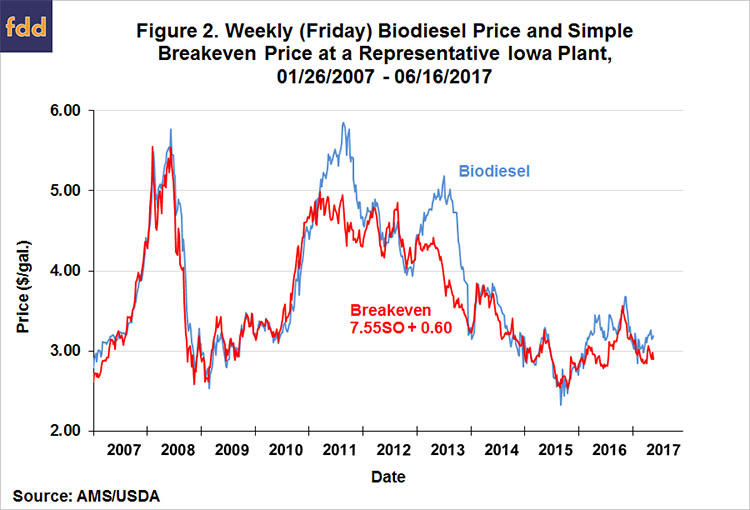 So, what explains the anomalous rise in biodiesel production profits in recent months? Figure 3 shows that it is not related to a surge in capacity utilization for the U.S. biodiesel production industry. After dropping sharply with the expiration of the biodiesel tax credit at the end of December 2016, utilization in March (latest available data) was 60 percent, near the average in recent years. The level of capacity utilization is about what one would expect in the famine phase of the biodiesel profit cycle. Another possibility, shown in Figure 4, is the huge drop in biodiesel imports to the U.S. since the end of the year. This undoubtedly does remove supply-related pressures on biodiesel prices, at least temporarily. It is interesting to note the similarity to the patterns that occurred after the expiration of the tax credit at the end of 2013. Biodiesel exports plummeted and biodiesel prices and profits recovered in the first half of 2014 before plunging sharply in the second half of the year. A final possibility is that obligated parties under the RFS foresee an increased role for domestic biodiesel to meet the “gaps” in the U.S. biofuel standards due to potential changes in policy that makes imported biodiesel more expensive. The changes could include import duties as a result of a recent WTO case brought by the U.S. against Argentina and/or conversion of the biodiesel tax credit from a blender to a producer credit (farmdoc daily, August 5, 2015). Rising biodiesel produces should incentivize additional domestic U.S. biodiesel production. 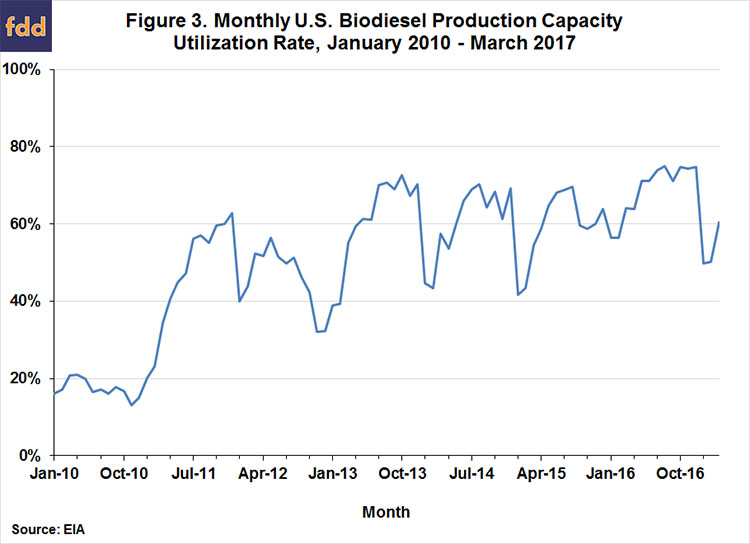 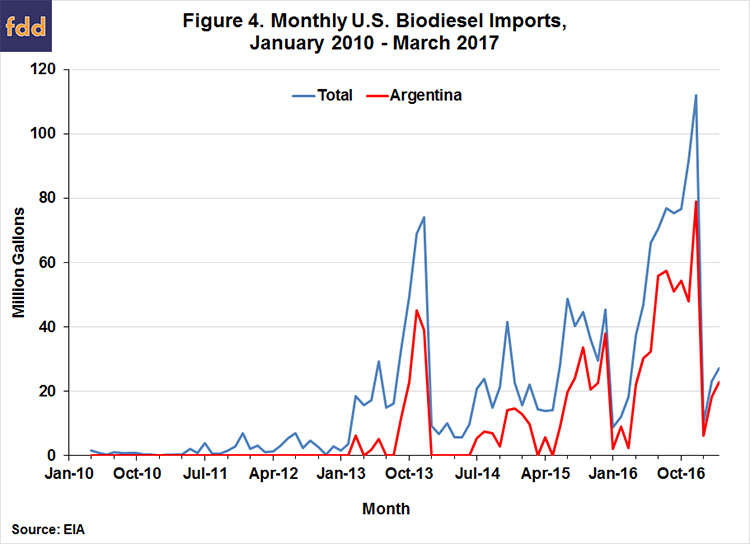 Biodiesel production profits in the U.S. have moved into the black in recent months, seemingly defying the typical pattern of losses in years following the expiration of the biodiesel tax credit. One possibility is that the recovery is temporary, reflecting short-term market adjustments following a large policy change. Another possibility is that the rising profits signal a major change in the expectations of obligated parties under the RFS. Changes may be afoot that will make biodiesel imports much more expensive in the future and obligated parties may be reacting by incentivizing higher levels of domestic production. Stay tuned to see which explanation is correct.