The U.S. biodiesel production industry for some time has had a distinct “feast or famine” pattern in terms of profitability. The industry made very large profits in 2011 and 2013, moderate profits in 2016, but losses in every other year going back to 2009. (e.g., farmdoc daily, January 28, 2015; February 11, 2016; March 1, 2017). The feast or famine pattern has been closely tied to expiration of the $1 per gallon biodiesel tax credit in the face of a binding RFS biodiesel mandate. The biodiesel tax credit expired at the end of 2011, 2013, and 2016, which is the reason for the profits in these years. Since the biodiesel tax credit was not in place during 2017, the expectation would be for another year of losses. Instead, the industry enjoyed profits for most of the year. The purpose of this article is to provide a full-year review of biodiesel production profitability in 2017 and assess whether these profits indicate a full-scale pattern change is in the offing.

To track plant profitability over time, weekly biodiesel and soybean oil prices at Iowa plants from the Agricultural Marketing Service (AMS) were collected starting in 2007. Natural gas costs through 2013 are estimated based on monthly data from the Energy Information Agency (EIA). Due to a change in the EIA price series, natural gas costs are estimated as one percent of the nearby NYMEX natural gas futures price starting in January 2014. Glycerin and methanol prices were obtained from OPIS. Note our profit estimates do not take into account revenue from retroactively reinstated biodiesel tax credits. We have previously shown (farmdoc daily, March 29, 2017) that this additional tax credit revenue, garnered through sharing agreements with blenders, can yield a dramatically more positive picture of the profitability of U.S. biodiesel production. Unfortunately, we do not have comprehensive data on the actual prevalence and terms of the sharing agreements, so we do not take this potential part of revenue into account. 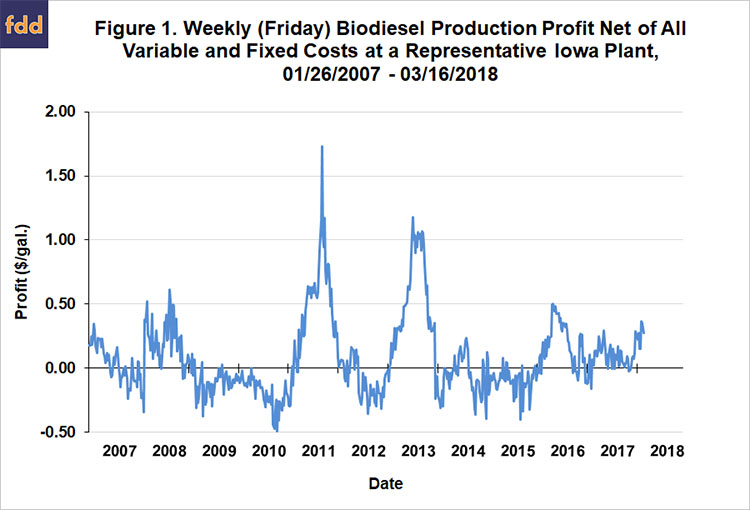 The spike in profitability during 2011, 2013, and 2016 can be directly traced to the race by diesel blenders to take advantage of the $1 per gallon blender tax credit that expired at the end of those calendar years. The key is that blenders face a binding RFS biodiesel mandate, and it is rational to effectively purchase biodiesel at a discount in the current year, due to the tax credit, in order to meet mandates in later years. Once the tax credit expires, the incentive to push up prices, profits, and production disappears and the biodiesel industry in the past returned to a norm of losses. This cycle, of course, depends on blenders perceiving there is substantial uncertainty whether the tax credit will be reinstated or not for the following year.

Additional insight about the cycle in biodiesel profits is provided in Figure 2. Here, the biodiesel price at Iowa plants is plotted versus a simplified breakeven profit relationship between soybean oil and biodiesel prices. Since soybean oil represents over 80 percent of the variable operating costs of the representative plant, all other costs are lumped into the constant term of 0.60, or 60 cents per gallon of biodiesel produced. The 7.55 slope is just the number of pounds of soybean oil assumed to produce a gallon of biodiesel. Outside of 2017 (and 2018 to date), the breakeven relationship tracks the biodiesel price very closely except during the spikes in 2011, 2013 and 2016. During years without an expiring biodiesel tax credit, the market generally priced biodiesel based on the cost of soybean oil, a partial markup for other variable and fixed costs, and zero profits. Implicit in this formulation is the idea that soybean oil prices lead (or cause) biodiesel prices at the weekly time horizon (farmdoc daily, September 10, 2015). We have also argued that the norm of losses outside of the spike periods could be traced to over-capacity in the U.S. biodiesel industry (farmdoc daily, February 11, 2016). 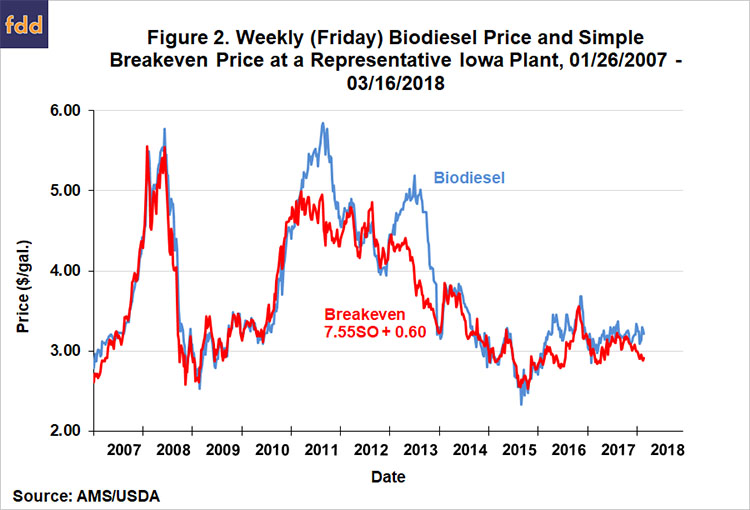 An obvious question at this point is why biodiesel profits in 2017 did not follow the well-established pattern of losses in years following expiration of the biodiesel tax credit. The answer is straightforward. The U.S. Department of Commerce filed an antidumping and countervailing duty petition with the International Trade Commission against Argentine and Indonesian biodiesel producers in March 2017. The U.S. subsequently won the case and consequently imposed import duties that ranged from 54.36 to 70.05 percent of the value of Argentinian biodiesel and from 50.71 percent for Indonesian biodiesel. The impact of the import duties was dramatic, as shown in Figure 3. From January 2016 through August 2017, the U.S. imported 1.047 billion gallons of biodiesel (and renewable diesel) of which 846 million gallons, or 81 percent, was from Argentina and Indonesia. There have been no imports of biodiesel from these two countries since August 2017, when the import duties went fully into effect. The net result is that a major source of biodiesel to meet the total RFS mandate requirement was blocked. We recently estimated that the total RFS requirement for biodiesel from the biomass-based diesel mandate, the advanced mandate gap, and the conventional ethanol gap for 2018 (and future years) was near 3 billion gallons (farmdoc daily, July 19, 2017). The imposition of import duties has eliminated about 550 million gallons of biodiesel imports that would in all likelihood have played a significant role in meeting the RFS requirements. The vast majority of the lost imports will have to be replaced by U.S. domestic production and this is likely in the process of pushing domestic biodiesel production close to capacity, if not beyond. From this perspective, it is not surprising that biodiesel profits were pushed up in 2017, just the opposite of the previous pattern. 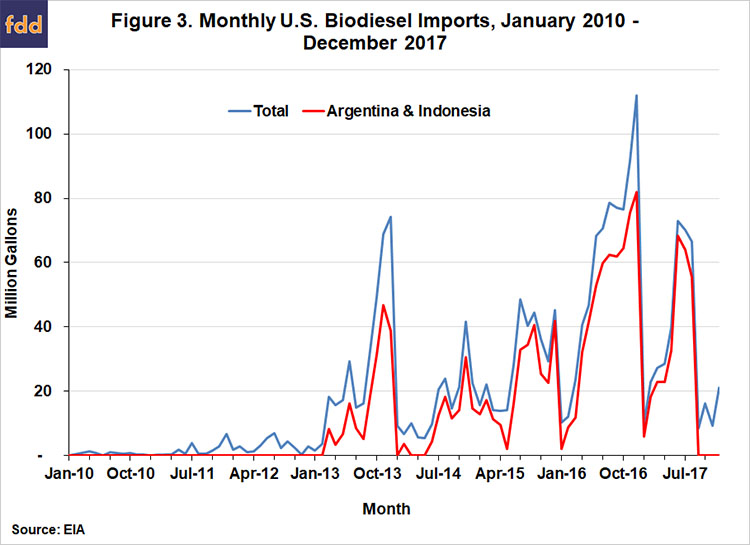 Finally, it is helpful to aggregate the profit margins over an annual horizon in order to see broader trends in estimated biodiesel production profits. Figure 4 shows total annual (pre-tax) profits net of variable and fixed costs for each calendar year between 2007 and 2017. Profits are presented in terms of both total pre-tax net returns and percent return to equity. The total profit in 2017 was $2.1 million, or 8.9 percent. We can use the average net profit for the representative plant to make a rough estimate of the loss for the entire U.S. biodiesel industry in 2017. Assuming all plants in the industry earned a net profit of $0.07 per gallon, then, total biodiesel production (excluding renewable diesel) for the U.S. in 2017 of 1.592 billion gallons implies aggregate industry (pre-tax) profits of $111 million. Again, it is important to emphasize that these historical estimates do not account for revenue from retroactively reinstated biodiesel tax credits. 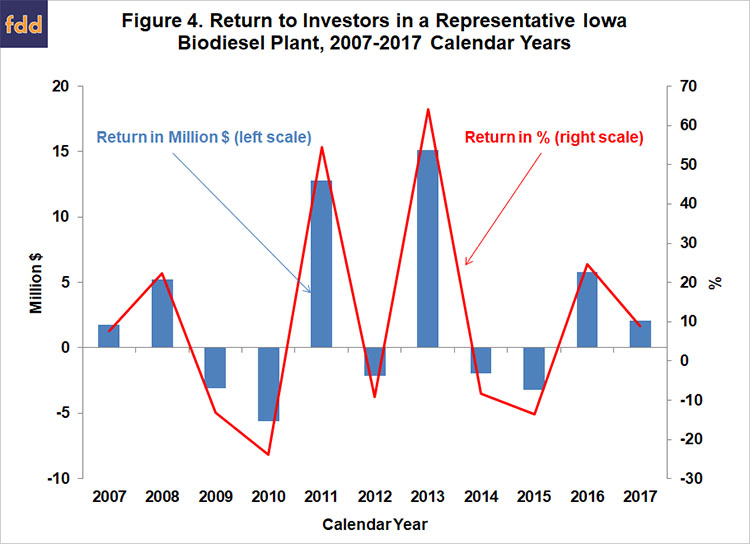 The average percent return to equity holders provides useful information on the attractiveness of investment in biodiesel plants relative to other investments. The average return was 10.4 percent over 2007-2017 and the standard deviation, a measure of risk, was 28.7 percent. By comparison, the average return for the stock market over this period, as measured by the S&P 500, was 9.8 percent and the associated standard deviation was 18.1 percent. The ratio of average return to standard deviation provides one measuring stick of an investment’s return-risk attractiveness, and on this measure the ratio for biodiesel investment, 0.34, is lower than the stock market as a whole, 0.54. The relative riskiness of biodiesel investment is not surprising given that the bulk of the positive profits earned by biodiesel plants occurred in only three years (2011, 2013, and 2016).

Biodiesel production profits in the U.S. have had a distinct “feast or famine” pattern for the last decade. In years when the biodiesel tax credit expired diesel blenders raced to take advantage of the credit and this pushed up production, prices, and profits. Without this incentive, the norm was losses in other years. Since the biodiesel tax credit was not in place in 2017 this should have been just another year of losses for the industry. However, this was not the case as the industry earned modest profits that averaged $0.07 per gallon. The reason for this change in fortunes is straightforward. The U.S. imposed duties on biodiesel imports from Argentina and Indonesia in 2017, and the duties were large enough to completely block imports from our two largest suppliers. Since the RFS mandate requirements for biodiesel still have to be met, this means the hole left by the import restrictions had to be filled by U.S. domestic production. In all likelihood this is in the process of pushing U.S. biodiesel production capacity towards its limit, and hence, the increasing biodiesel prices and profits. The healthy profits of early 2018 indicate this process is continuing and that the changes wrought by the import restrictions are large enough that it may well spell the end of the “famine” part of the biodiesel production cycle for some time.

Irwin, S and D. Good. "Filling the Gaps in the Renewable Fuels Standard with Biodiesel." farmdoc daily (7):130, Department of Agricultural and Consumer Economics, University of Illinois at Urbana-Champaign, July 19, 2017.