On Monday December 10, 2018, the House and Senate conference committee released the conference report for the Agriculture Improvement Act of 2018; the final version of the 2018 Farm Bill (Senate Ag Committee; House Ag Committee).  On Tuesday, December 11, 2018, the Senate moved quickly to pass the conference report with a final vote in favor of the farm bill of 87 to 13 (Senate Clerk, Vote 259).  On Wednesday, December 12, 2018, the House voted overwhelming to pass the farm by 369 to 47 (16 not voting) (House Clerk, Vote 434).  Given that it passed by veto-proof majorities, it is likely that the President will sign it and the Agricultural Act of 2018 will soon become law.  This article provides an initial review of the major provisions of the bill.

From the beginning of the debate, the outlook for a farm bill in 2018 was clouded by concerns about relatively lower crop prices, the restricting parameters of the Congressional Budget Office (CBO) baseline and the political landscape in Congress (farmdoc daily, April 12, 2018).  Before the farm bill debate began, however, Congress relieved much of the baseline pressure by returning cotton to the Agriculture Risk Coverage (ARC) and Price Loss Coverage (PLC) programs in Title I and improving dairy assistance in Title I and crop insurance (farmdoc daily, February 14, 2018).  The House Agriculture Committee moved first but stumbled; intense partisanship, particularly over the Supplemental Nutrition Assistance Program (SNAP) in Title IV, dominated the House debate (farmdoc daily, April 26, 2018; May 24, 2018).  The Senate Agriculture Committee adhered to a more traditional path, moving through a largely status quo farm bill with strong bipartisan support (farmdoc daily, June 12, 2018).  Resuscitated in the House but remaining a partisan exercise, the farm bill sailed through the Senate on one of the strongest votes in history but the two versions became stuck in a conference stalemate through the mid-term elections (farmdoc daily, June 19, 2018; July 3, 2018; August 9, 2018; September 27, 2018).

For this initial review of the conference product, the discussion will focus on the four key mandatory titles in the farm bill.  The CBO cost estimate (score) reinforces the view that the bill is largely status quo.  CBO estimates very little net change in spending: an increase of $1.8 billion through 2023, but sustained reductions in assumed outlays from 2024-2028 result in only a $70 million increase over the entire 10-year budget window (CBO, December 11, 2018).

In general, the 2018 Farm Bill continues the farm programs of the 2014 Farm Bill:  Agriculture Risk Coverage (ARC); the Price Loss Coverage (PLC) program; and the Marketing Assistance Loans (MAL) with Loan Deficiency Payments (LDP).  One of the key changes is to the election between ARC and PLC.  In the 2014 Farm Bill it was a one-time election that could not be changed over the five-years of the bill.  In the 2018 Farm Bill, however, the election is for the 2019 to 2020 crop years and beginning for the 2021 crop year, the farmer can change the ARC/PLC election each year.  In all elections, PLC remains the default option.

A second major change to farm programs is an option to update program yields for PLC.  Owners of an FSA farm will have a one-time option to update their program yields, but the formula is somewhat complicated.  It operates in two steps:  (1) 90% of the average yield for the 2013 to 2017 crop years, excluding any crop year in which the yield was zero; and (2) reduced by a ratio that compares the 2013 to 2017 national average yields per planted acre to the 2008 to 2012 national average yields.  Table 1 provides an initial estimate by crop of the expected yield update formula.

In addition to the PLC program yield update option, the bill also includes changes to the calculation of yields for the ARC-CO program.  Specifically, the plug yield is 80% of the transitional yield and is used in the ARC calculations to replace yields in any year that are below it.  The revisions also require the Secretary to calculate a trend-adjusted yield factor to use for the benchmark calculation.  This would effectively use trend-adjusted yields used in crop insurance where applicable. 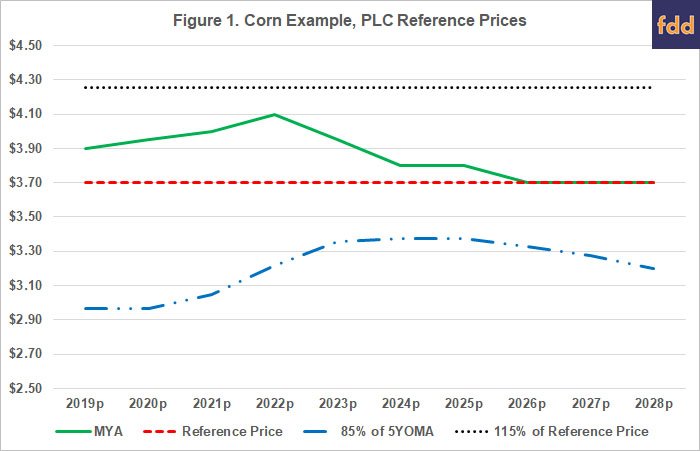 The 2018 Farm Bill also includes modified language regarding base acres.  Specifically, it prevents payments on any base acres if all the cropland on the FSA farm was planted to grass or pasture during the years 2009 through 2017.  The base acres and program yields for the farms affected by this provision will remain on record with FSA, but payments will not be made on those acres and farms.  This provision is likely designed to help offset the cost of the yield update.

There are few changes to the crop insurance program in the 2018 Farm Bill.  The most notable revisions involve treatment of cover crop practices.  First, the bill defines cover crop termination as a practice that historically and under reasonable circumstances results in termination.  It also provides that cover crop practices are to be considered a good farming practice if terminated according to USDA guidelines (or an agricultural expert) and that termination should not impact the insurability of the insurance crop.  These changes should help alleviate some of the concerns farmers have with cover crops and may improve adoption of that practice where it makes agronomic sense.

The biggest issue for the conservation title going into conference was elimination of the Conservation Stewardship Program (CSP) in the House farm bill.  The conference committee negotiated a compromise that eliminates it as a stand-alone, acreage-based program.  The existing authorities for CSP are combined with the Environmental Quality Incentives Program (EQIP).  The CBO score shows a reduction in CSP of -$12.4 over 10 years and an increase for the combined CSP/EQIP of $8.5 billion.  Part of this reduction appears to have been used to increase funding for the Agricultural Conservation Easement Program ($1.8 billion) and for the Regional Conservation Partnership Program ($1.7 billion).  This article will provide a first look at the changes, but more analysis is needed.

The conference bill terminates the acreage-based provisions of CSP and converts it to a specific funding level each fiscal year, similar to the way EQIP is funded.  The existing acreage-based program ends but current five-year contracts will continue and those expiring before the end of 2019 will be permitted a one-year extension for transition purposes.  Overall, the general authorities for CSP are reauthorized with revisions to focus assistance on soil health and conservation planning, cover crops, grazing management, as well as simplification for aspects of application.

Buried within all of the changes for CSP is information requiring further analysis.  As acreage-based CSP is terminated, program spending goes to zero after FY 2025 as existing contracts expire.  Funding for EQIP and the new CSP increases over these years. Table 3 summarizes the spending for EQIP and CSP from the conference revisions by looking at what Congress intends USDA to spend on the programs (budget authority) and what CBO estimates will be spent (Outlays) by USDA.  Notably, CBO uses outlays to score the provisions of the bill and for the baseline against which they are scored.

One takeaway from Table 3 is that the CBO score does not reflect the total investment from CSP’s annual contracts, which is calculated in Table 3 as Net CSP by adding the budget authority for the new program to the spending on existing contracts.  Similarly, the CBO score is less than what Congress has made available for the combined EQIP-CSP program.  This amount is calculated in the final column as EQIP budget authority (what Congress intends to be spent) and the Net CSP (budget authority for the new program plus the expenditures on existing contracts).  Finally, the livestock carve out for EQIP that had been 60% of the funds is reduced to 50% which would be expected to increase the amount of EQIP funds that go to row-crop working lands conservation.  This is not illustrated in Table 3 nor is it estimated in the CBO score.

Finally, in conservation there are changes to the Conservation Reserve Program (CRP) that begin with increases in the current 24 million-acre cap on what can be enrolled.  The acreage cap will increase each year, reaching to 27 million by 2023.  The bill would also limit the annual rental payments to 85% of the average county rental rate for general sign-up or 90% for continuous practices.  It also creates within CRP a new initiative focused on clean lakes, estuaries and rivers as a priority for the continuous enrollments, capped at 8 million of the overall acres in the program.  There is also a pilot project for 30-year CRP contracts and a shorter-term CRP for soil health and income protection, using three, four or five year contracts on up to 15% of a field.

More analysis is needed of each of these changes, as well as the combined effects on conservation investments as a result of the various changes.  Much will also depend on how the programs are implemented and operate. There are provisions in the bill for more and better data collection that may help future analysis of the policies as well.  For now, it appears that the 2018 Farm Bill goes against the trends of recent farm bills where funds and authorities shifted from reserve policies to working lands policies.  Under the lower price scenarios, it appears that Congress is shifting some of the funds and authorities back to reserve programs (CRP and easements) and reducing those for working lands.

As discussed previously, the biggest area of controversy in the House farm bill were the revisions to SNAP.  The House sought to increase work requirements, alter category eligibility and other benefit calculations.  As expected, the House conceded on all controversial changes to the SNAP and accepted the bipartisan Senate provisions in order to complete a farm bill.  In total, the CBO score illustrates this outcome.  The conference agreement produced only minor revisions to the nutrition programs, including SNAP; total increase in spending of $98 million in the first five years but with no increase or decrease over the total 10 years in the budget window.

After a contentious effort in the House and a stalemate in conference, the 2018 Farm Bill effectively continues much of the policies authorized in the 2014 Farm Bill with relatively little change.  This status quo outcome was largely a result of multiple years of relatively lower crop prices, political realities and the constraints of the budget rules.  It may also reflect general satisfaction with much of the current policy system.  Future articles will delve deeper into the programs and the likely impacts of the minor changes in the bill.  In addition, review of the farm bill’s implementation and operation will provide valuable feedback on the policies and decisions made by the 115th Congress.

Coppess, J. and T. Kuethe. "Mapping the Fate of the Farm, 2018 House Edition." farmdoc daily (8):95, Department of Agricultural and Consumer Economics, University of Illinois at Urbana-Champaign, May 24, 2018.